We are so proud that Janet Ward Bl 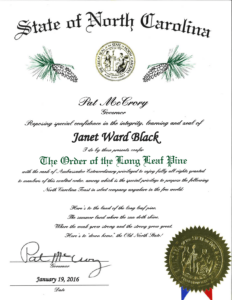 ack was named yesterday by Gov. McCrory to the Order of the Long Leaf Pine!

The order is considered “among the most prestigious awards conferred by the Governor of North Carolina. It is awarded to persons for exemplary service to the State of North Carolina and their communities that is above and beyond the call of duty and which has made a significant impact and strengthened North Carolina.”

Here’s an article from the Salisbury Post about the presentation, which occurred during Janet Ward’s mother’s 89th birthday party in Kannapolis. It came as quite a surprise to Janet Ward.